This past weekend I ventured outside the borders of the great state of Texas and ventured into Kansas to visit family and to test the tolerance level of my toddlers in the car. Results are in and the kids were not a fan of the car ride and my brother in-law is now not a fan of Elmo (after having Sesame Street on repeat for hours). Well, while we were there and watching the opening weekend of Texas Aggie football a commercial came on that had people talking. It was the commercial for the new Nokia Lumina and it’s 41 megapixel camera. Since I am a photographer, everyone looked at me while making some kind of comment to me about how great a camera it is. I laughed, and told them what I am about to tell you:

Megapixels don’t matter. Period. I have a camera that cost me over $2k and it has half the megapixels as that phone. So should I shoot my next wedding with the Nokia Lumina? Ha! The megapixels basically just determine how big you can blow your print up…it is how many pixels (little dots that make up a picture) are used in each picture. In the 90’s cameras had enough megaixels to make basic prints and 10 years ago most people had enough megapixels on their camera to print a billboard. But for some reason megapixels became a selling point, and consumers have swallowed the bait.

Next time you look at a camera, look at things that matter. There are some lenses that are made out of plastic, not glass. The lens is the eye of the camera…what captures you image…don’t you think that is more important than megapixels? Does it matter how many megapixels if your lens is foggy? Other things that matter: how well does it focus? how does the camera capture color? how sharp are the pictures? how good is the photographer – did they stand still, compose the shot well, etc?

Don’t be sold on the marketing hype of megapixels. See test shots. Look at how the pictures look close up. Don’t worry about how your picture will look when blown up as big as biggest screen in Dallas: the one at Cowboy Stadium….after all, if you need pictures that big, you won’t be buying a consumer camera. 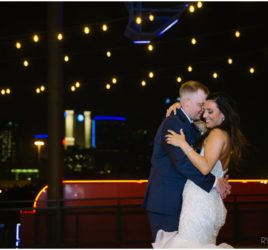 Tonya and Lee's Wedding at Gilley's in Dallas

The Brooks at Weatherford | Ryan and Hannah's wedding